The ZX Spectrum is an 8-bit personal home computer developed by Sinclair Research. It was first released in the United Kingdom on 23 April 1982 and went on to become Britain's best-selling microcomputer.  The Spectrum was released as eight different models, ranging from the entry level with 16 KB RAM released in 1982 to the ZX Spectrum +3 with 128 KB RAM and built in floppy disk drive in 1987; altogether they sold over 5 million units worldwide (not counting unofficial clones). The Spectrum was among the first home computers in the United Kingdom aimed at a mainstream audience. The machine was officially discontinued in 1992.

Please explore the range of our PSU products, safely powering and protecting these glorious machines!

Sort by:
Best sellers Relevance Name, A to Z Name, Z to A Price, low to high Price, high to low
Showing 1-1 of 1 item(s) 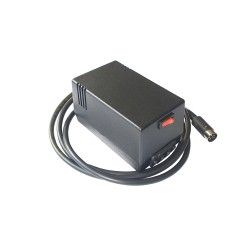